Same recipe as “Decorated bread” but this time made with whole wheat flour. Which means stronger aroma, stronger flavor, darker crust color and obviously more nutrients than regular white bread. This because whole wheat  flour contains approximately the same relative proportion of nutrients and components as the original wheat kernel.

As for the white bread, the same rule for incisions also applies here. So first cover the loaf with a thin layer of white flour. Dusting the top of your loaves with flour prior to scoring will ensure maximum contrast between white flour and dark baked crust. 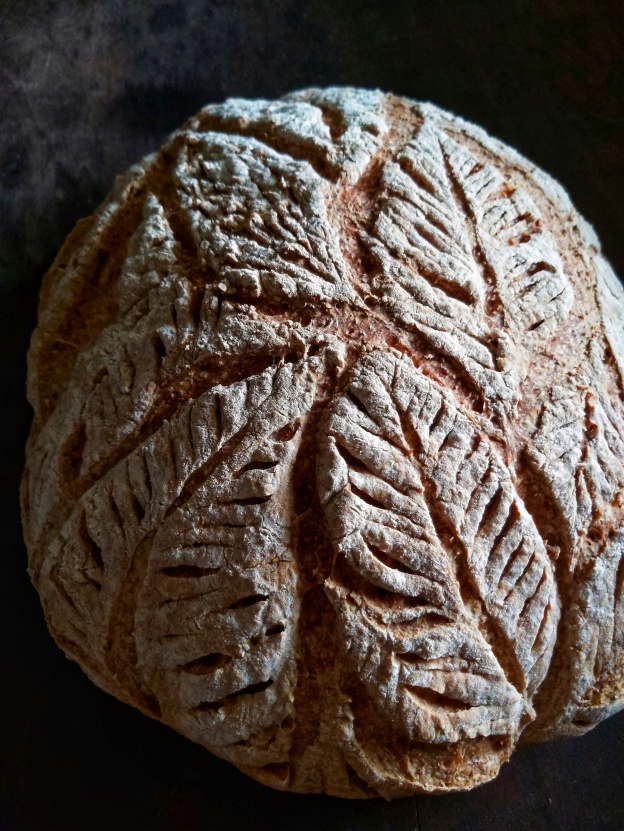 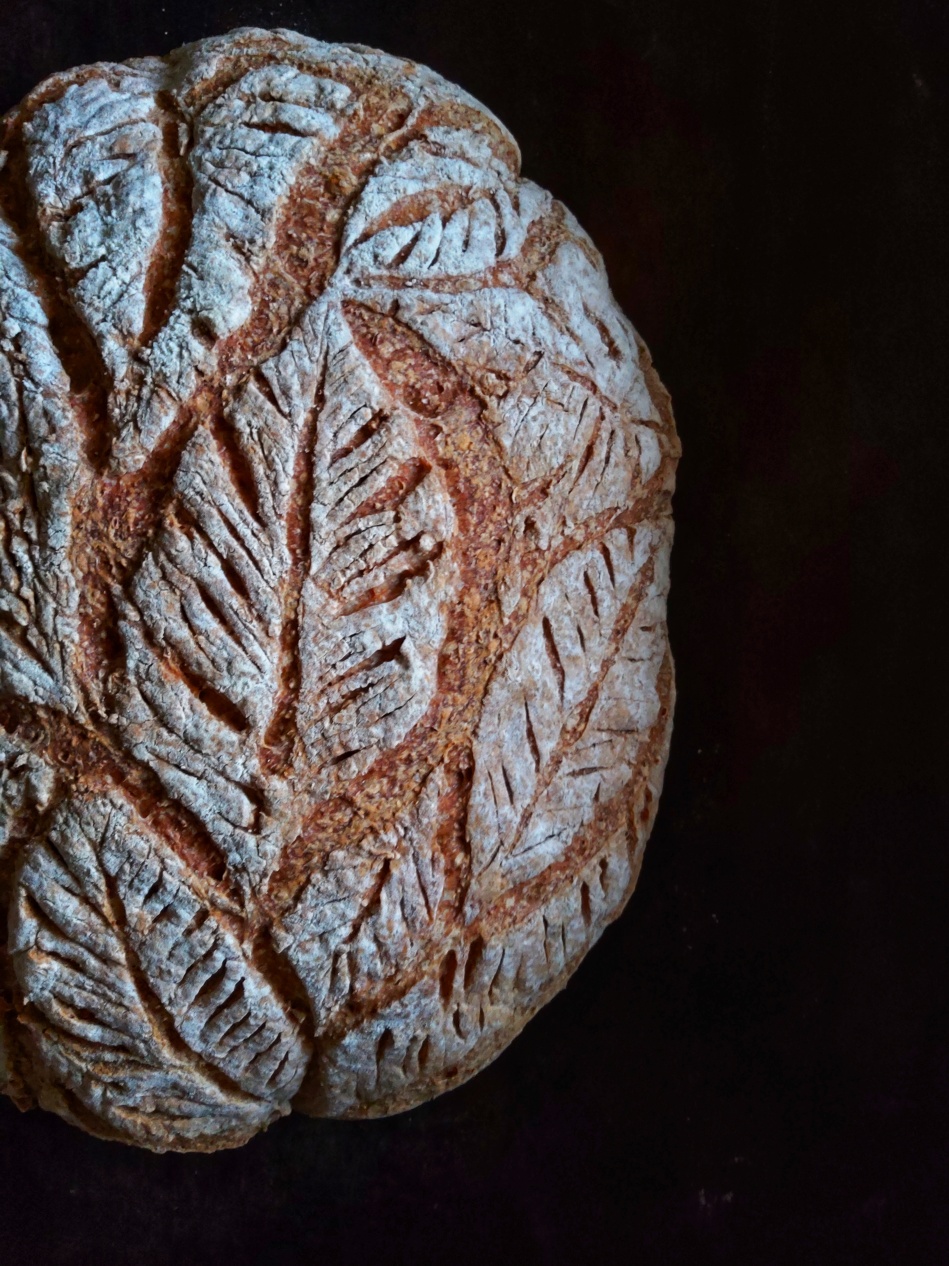 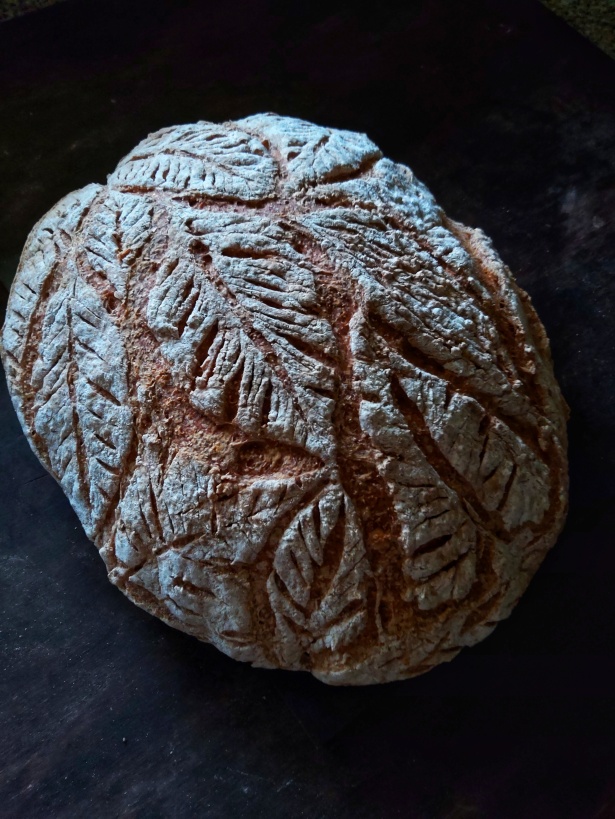 Lambròpsomo is a bread from the Byzantine times that continues to exist to the present days throughout Greece as a traditional Easter bread. It is used to package it in various forms on Holy Thursday.  The shape of each bread varies according to local traditions. The best known and the most used shape is the braid, on which a red egg can be placed. The braids and knots on the bread, derive from pagan times as a symbol of the removal of evil spirits.

Not as difficult as it may appear. This decorative bread is made from the same dough as any other hard flour bread. The only difference is the use of a well – sharpened blade with which incisions are made everywhere and all around on the bread. Flowers, ears of wheat, a sun, a smile, geometric lines, initials of a name or whatever else your fantasy desires. The only tip before cutting is to cover the loaf with flour. Dusting the top of your loaves with flour prior to scoring will ensure maximum contrast between white flour and dark baked crust. Follow instructions and have fun! 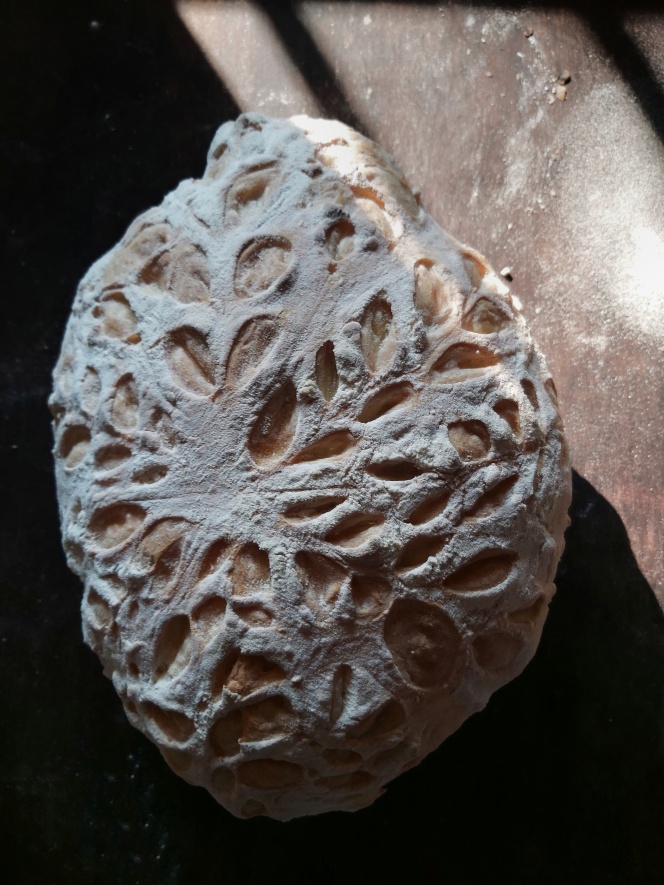 *Strong flour, also commonly known as strong bread flour, is made from hard wheat varieties. It contains more gluten (12% to 14% gluten content),than other types of flour which gives it its elasticity and enables the dough to rise with a good structure.

(Dusting the top of your loaves with flour prior to scoring will ensure maximum contrast between white flour and dark baked crust.)

With a sewing thread form a cross on the dough. Then on each fourth format, draw 2 other lines as in the gallery photos

With a sharp razor make small incisions on the sides of each line – from the top to bottom- so that it looks like an ear of  wheat.

Bake for 25-30 mins until golden brown and the loaf sounds hollow when tapped underneath. Cool on a wire rack.

“Christopsomo” in Greek means “Christ’s Bread” and this is why the bread is decorated with a cross. Christopsomo is considered very sacred bread in Greece and is usually prepared the day before Christmas and is served at the Christmas table.

According to the tradition,  it has a cross made out of dough in the center and it has whole walnuts, almonds, raisin in it, that represent abundance.  It also has other sacred shapes made out of dough which portray animals, members of a family, babies, grapes (a frequent symbol in Christianity and New Testament who represents the abudance), fruits, stacks of wheat (it represents a good harvest), flowers, crosses, a sun (represent life and strenght)  leaves (the number of  leaves represent the number of family members).

In some parts of Greece, where farming has always been a major occupation, Christopsomo is adorned with dough likenesses of specific farm tools, plows, ears of corn, sheaths of wheat, mules, horses, sheeps, shepherds and more. Everyone decorates it with the symbols that best represent it.

They are almost universally round, the circle a symbol of eternity, or, alternatively, cross-shaped.

**Merry Christmas to everyone** 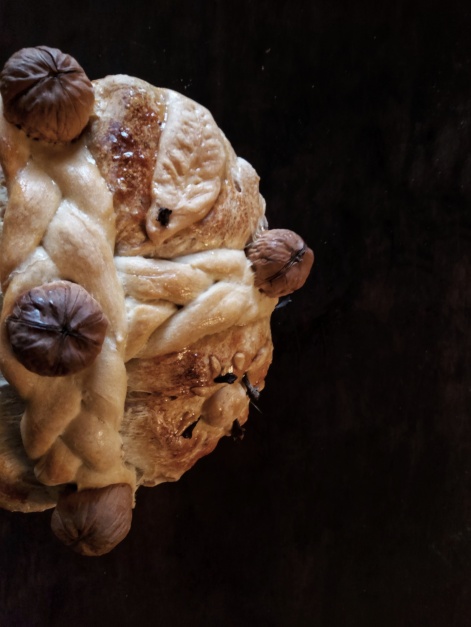 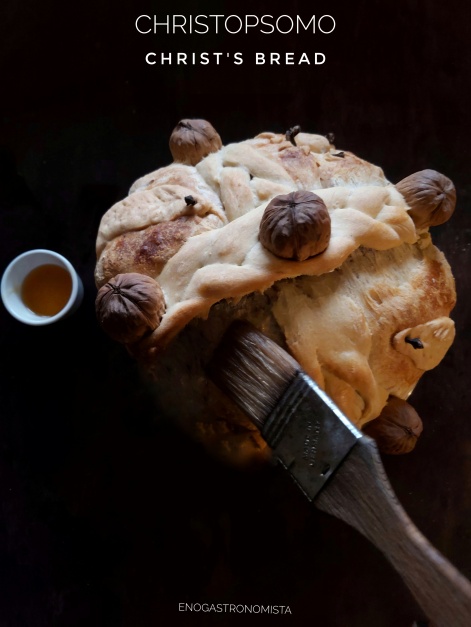 Prepare the dough for the decoration of Christopsomo, so add the water, olive oil, flour and salt in the mixer’s bowl or you can simply use a bowl and your hands. Mix until the dough is smooth. Wrap the dough in plastic wrap and set aside for 15 minutes to rest.

Deflate the dough lightly with your fingers and shape into a round loaf.

Add the salt, anise and walnuts. Beat for 1 minute, just to combine. They are not added from the start so that they don’t get crushed inside the dough.

Butter a round baking pan (28-30 cm) and line with parchment paper. Transfer the dough into the baking pan and spread lightly. Brush the top lightly with some beaten egg white and water.

See step by step the photo gallery below

Lagana (Λαγάνα) is an ancient Greek flatbread traditionally baked for Clean Monday (Καθαρα’ Δευτερα) –  the first day of the Great Lent. (Clean Monday actually refers to the abstention from sinful attitudes and non-fasting food ). Traditionally, it was prepared unleavened (without the yeast),  like those mentioned in the Old Testament, but leavened lagana is nowadays more common. It is typically flat, oval-shaped, with surface decorated by impressing fingertips.

Sesame seeds are a common topping, and it may also be topped with other herbs, and seasoned with olive oil.  Linguistically, the word lagana comes from the Greek word “ laganon” (in ancient Greek: λάγανον),  which is also the origin of the Italian word lasagna.

Lagana is never cut with a knife but rather broken apart, because iron, the stuff of knife-making long ago, was believed to contain the powers of evil.

Pita bread is flat, round bread that originated in Greece, and is commonly found in Middle Eastern and Mediterranean kitchens. The first known mention of “Pita” is in Aristophanes’s comedies.

Traditionally, the pita bread is made with wheat flour and yeast. It is traditionally accompanied by hummus, tzatziki, or tabouleh. In Greece, pita is a component of pita-souvlaki. These types of sandwiches involve the wrapping of souvlaki or gyros with tzatziki, tomatoes, onions, fries, and condiments into a pita bread 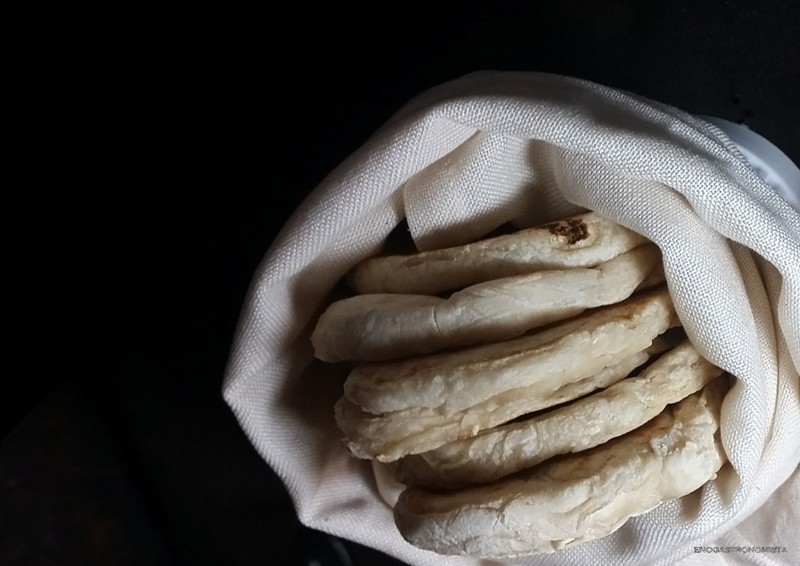 This pita recipe has been adapted from http://www.akispretetzikis.com

Stuffed bread. Transform the usual bread dough into a savory meal that you can enjoy for brunch, lunch, dinner, at school or at work. Great idea for Easter picnics. Easy, flavorful, fragrant. Feel free to use different ingredients as options such mozzarella, bolognese sauce, bacon, sausage, salami, meatballs, peperoni etc. 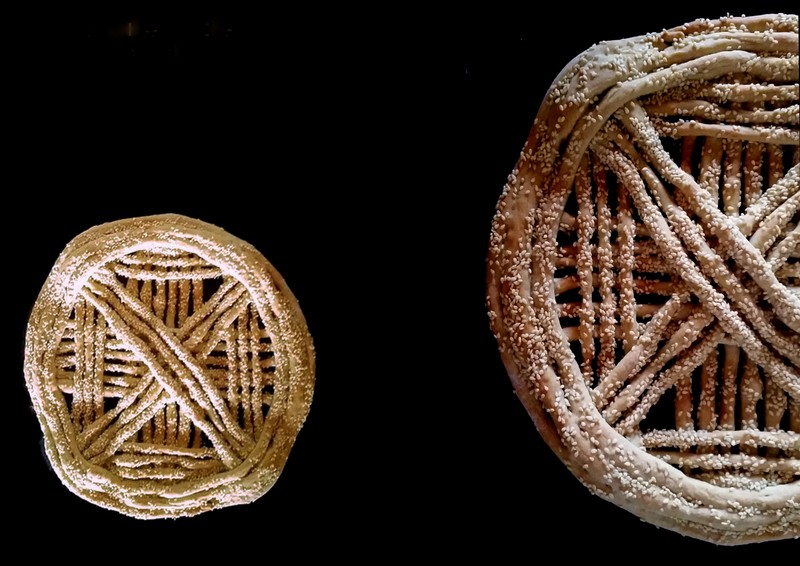 Cyprus bread is more than food, is a religious expression.

Dr. Dorita Voskaridou is a researcher, author and founder of the Decorated Breads of Cyprus museum in Limassol.

Dorita’s book “To Ploumisto Psomi tis Kyprou” (The Decorated Bread of Cyprus)  is a collection of historical and personal testimonies. Decorative breads for every occasion, based on various village designs have been re-worked by this talented lady.

“All the symbols came from the ancient times when people used to believe in 12 gods. There are symbols from ancient Greek pots. From excavations we then find the same symbols in bread.

There were Byzantine shapes and influences. Women in villages see icons of churches which inspire them to go home and make the bread. Every village has different kinds of symbols and every woman has a different, very personal style, for example one village may have the same symbol but each woman makes something different. Every woman has her own aesthetic.

Bread is the king of the house in Cyprus proverbs. It is very important still and is the main nutritional ingredient in our culture. In Cyprus’ popular traditions, bread on the table symbolised Jesus Christ himself. So nobody gets up from the table until the bread has been removed. The bread has to move first away from table,” says Dorita Voskaridou 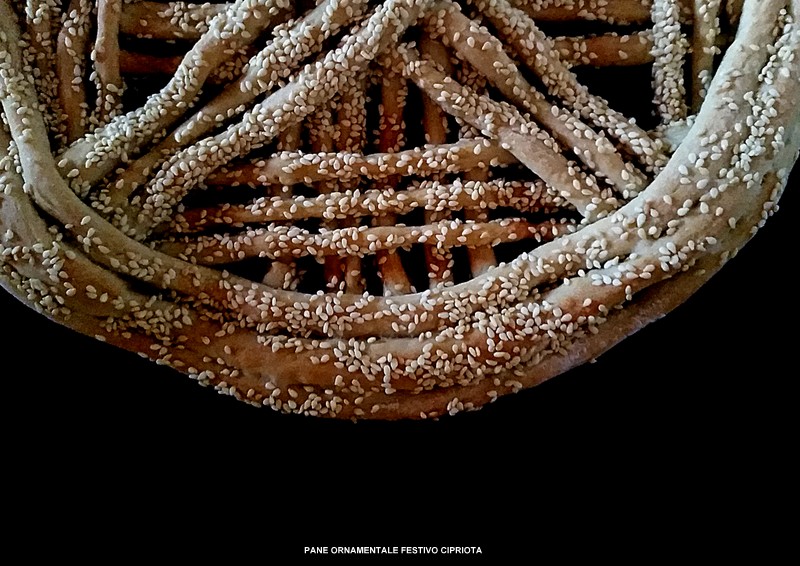 I tried to reproduce one of these ancient and full of tradition shapes. I have no idea if it is a wedding, communion or easter bread. I choose it for the presence of the cross and the X of Xrist. (Χριστος in Greek language). So i think perfect for Xristmas.

Follow the instructions step by step. You will need 33 dough cords and a good amount of sesame seeds. Isn’t  difficult as appears. Crunchy texture , delicate flavor. Enjoy a Merry Xristmas! 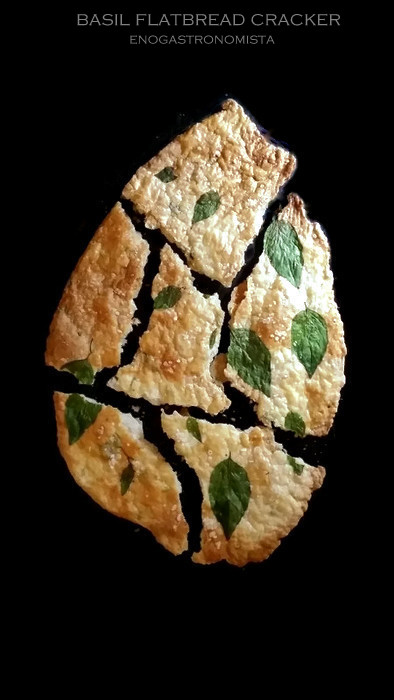 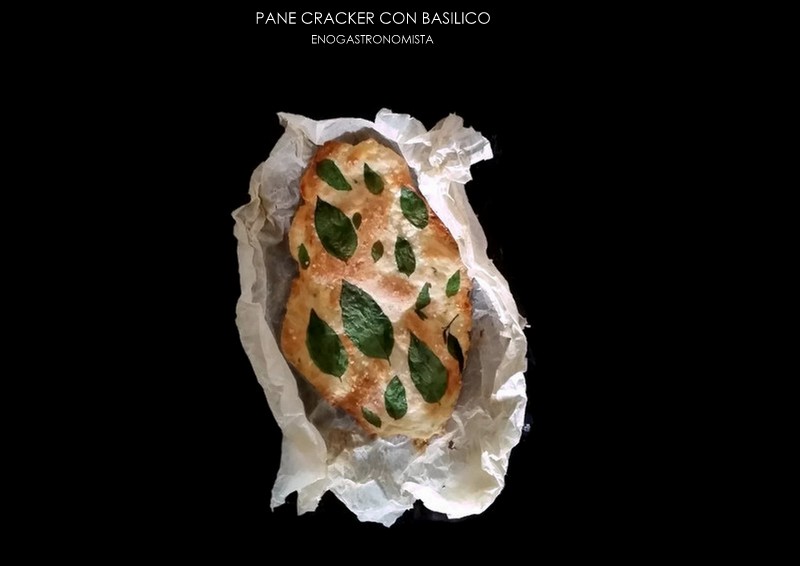 Crackers can be stored in an airtight container at room temperature for up to 3 days. 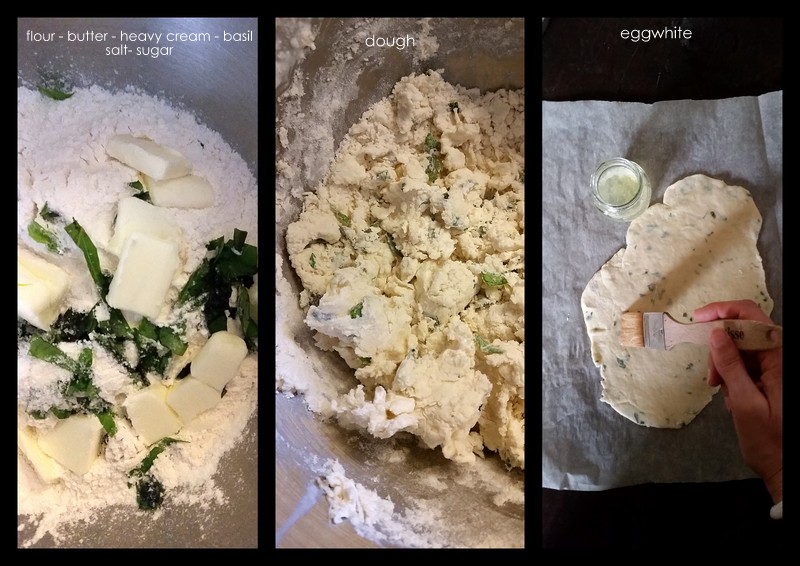 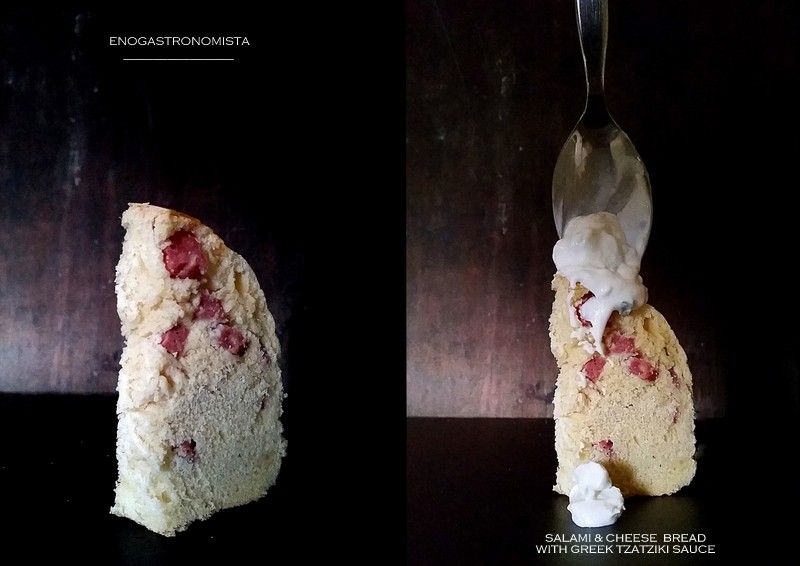 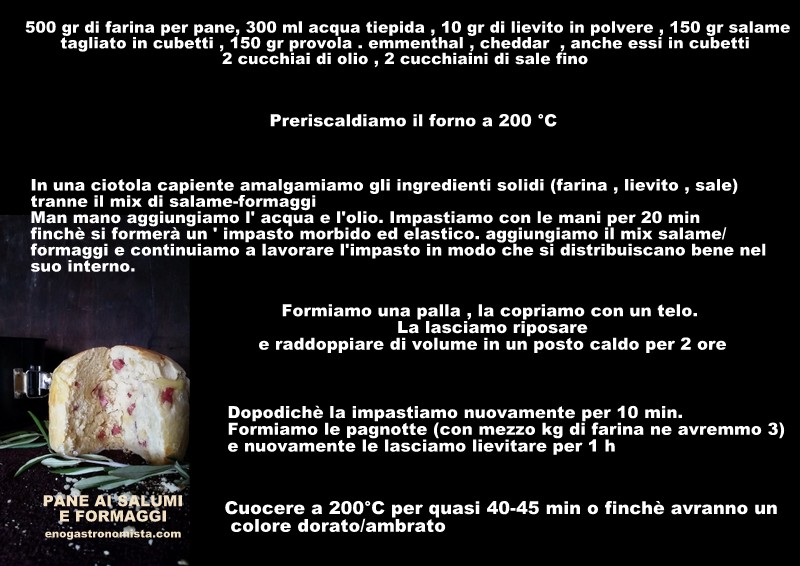