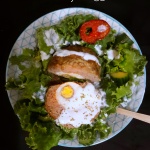 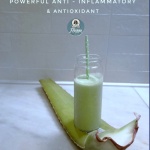 So, always using our favorite 100% organic brand of dairy products, the award-winning and prestigious Greek Creamery “Flegga”. Today’s smoothie includes goat’s bio kefir with the addition of aloe vera, green grapes, green apple and spinach. Just add all ingredients into a blender (after freezing the grapes) and mix until velvety and creamy.

Method: Wash and freeze the grapes, simply by placing them in a plastic container.

The next day, wash the spinach leaves and cut the apple into small pieces. Do not peel it.

Cut a piece of aloe, more or less than 20cm.

Cut out the green peel and remove the gel with the help of a spoon.